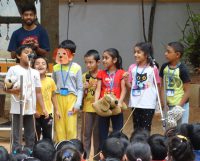 In the words of Wordsworth, “poetry has its origin in emotions recollected in tranquility”

Poetry week was celebrated in AMIS from 10th to 14th of July. Poems in various languages were presented by children. Some of them chose to do it in groups while a few others preferred to recite them individually. Children came out with different ideas, some thought of hand made costumes, while the tiny tots relied on their parents for their beautiful costumes. Some chose long poems displaying their brilliant memory while others played safe picking the short ones. At the end of it all, some of them had started writing their own poems. It was time well spent getting to know the different poems penned by different poets !