On June 10th 2012, Auro Mirra International School, Bangalore (Ulsoor), organized an Orientation Programme for new parents. Beginning with meditative silence with Mother’s music, Pradeep Bhai, Chairman of Sri Aurobindo Society, Puducherry, spoke of motivation and the determined vision of AMIS. This was followed by a unique experiential session on ‘speaking with the heart through flowers’ facilitated by Ms. Harvinder Kaur, Director of Indian Council for Integral Education, Puducherry.  Varieties of flowers were laid out and the gathered members were asked to sweep their vision over them, then walk silently to the flower that appealed to them the most. They silently picked up the flower and were asked to gaze at its beauty and feel it deeply as a child would. Since everyone was already in a meditative space, taking them deeper into beauty and oneself through flowers was a natural movement. This was followed by a shared discussion and finally they were given a card with its spiritual significance as given by the Mother, along with its scientific name.

Ms. Harvinder Kaur then in her address, attempted to make parents aware of building a child-friendly atmosphere at home and to guide their child in their growth and education. It began with a haunting question, “What if there were no schools?  What would you do if you had to educate your child?” There was a long pause to ponder and the pointed question was thrown, “Are you doing that with your child?”  Later one of the parents shared how the question brought tears to her eyes and led them to think about parents role in the life of a child. Some features as to how Integral Education is to be implemented in the school, were shared and also how parents can be a part of this unique journey.

All the didis and bhaiyas (teachers) along with the aunties/helpers who took care of the little ones, were introduced in an interesting manner to the audience. The parents were then in for a joy ride! A great experience was in store for them, where all were asked to forget that they were grown up, let their hair down and become children again! Each didi took a group of parents (according to the colour ribbon they were randomly given) to the amazing classrooms in the newly constructed building. The place led many of them to blink for a long, long while. Bangalore had yet to see a campus like this! All parents were made to play concentration building games that their children would be playing everyday in the school. This was to give a taste of one dimension of Integral Education to the parents, for their understanding and for them to support their child’s growth.

The scenes that followed had to be seen to be enjoyed.  There they were – all the grown up children having the time of their lives!  You could see someone in one classroom, trying to balance blocks of wood on both hands, walking to a chair, climbing  and balancing on one leg without letting a single block fall!  In another place, all the fathers were singing and jumping to nursery rhymes, and then scrambling to put peas in cups with a straw in their mouth. A floor became a vast canvas of creative art work as parents were using beads and shiny bits of paper to create masterpieces.  Some were caught in rope work, others stringing coloured beads in a sequence challenging their memory and concentration.  In all, it was a day that revealed how learning can be fun and develop our core faculties on which learning depends. 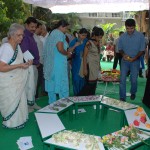 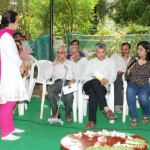 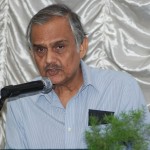 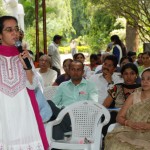 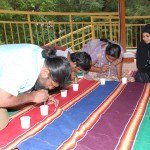 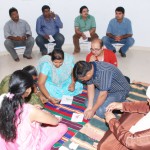