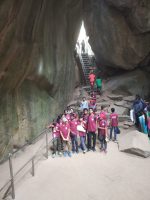 More Photos
A two days trip to God’s own country, Kerala, was organized for children of grades 6, 7 and 8. It was the most anticipated excursion of the year as children were crossing the borders of Karnataka to expose themselves to a new place, its picturesque sights, unique culture and exciting experiences. On the first day, children made a long trek to the Soochipara falls but the effort was worth it for as soon as they reached the spot, the sound of the cascading water and the sight of a pristine waterfall rejuvenated them all. Furthermore, the light sprays of water wiped away all signs of weariness and sent a quick thrill through everyone. An adventurous jungle safari through the Mathunga forest was next in the itinerary. This safari ride was as exciting as it was scary. Children were waiting with bated breath to spot animals but the possibility of also running into a tiger sent a chill down their spine. They spotted many wild animals and birds and could not stop talking about them even hours after the safari. The next day included a strenuous climb to reach the Eddukal caves. The climb was challenging and children had to spend every ounce of their energy to get to the top. But they did it nonetheless and were eager to learn from the carvings on the rocks about how the people of the prehistoric times. It was followed by a visit to the Pookode lake and a walk along its length. The enchanting lake and the majestic mountains overlooking it were a sight to behold. The soothing and serene ambience of the lake turned the exhaustion of the morning climb into a memory of the long past. A night view of the Banasura dam was a unique experience in itself. As the trip came to an end, children realized travelling was as much about learning as it was fun. The trip may have ended but it had given them a treasure trove of memories to last a lifetime