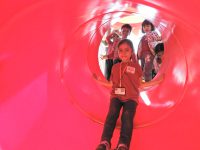 More Photos
The picnic for children of LKG and UKG to Agara Lake Park was organised on 11th Jan 2019. The journey started at 8.00 am and was to be made by bus. The tiny tots were dressed in Auro Mirra maroon T-shirts and were excited to get to the picnic spot. The buses reached the destination on time. The park consisted of a circular cycling path which went all around the lake. It was also home to massive trees and flowering plants which were in full bloom heightening the beauty of the park. The children, at first, took a walk along the Agara Lake and were elated to see the cute ducks swimming in the waters. After that they enjoyed playing in the big sand pit situated in the middle of the park. There were swings, slides, see saws and a merry go round which doubled the merriment of the children. After lunch, diyas played some games with them. On their return to the school, children were given juicy oranges to relish. The children had a gala time and were eager to share their experience with their parents.