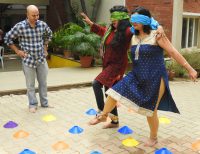 The Parent’s workshop for the year 2018-19 began on 28th May 2018 and lasted five days.  Yamini didi welcomed parents and thanked them for their brave choice to spend their valuable time with the school to participate in the holistic development of their children.  Yamini didi and Pratima didi gave the gathering a glimpse of the value based assembly conducted in school.  Harvinder didi led parents into a discussion on the topic “Why are we here?” Every day of the workshop began with ‘Powers Within’ games. Diyas conducted “Powers Within”  to give parents a hands on experience of the games played by children which aimed at developing specific faculties in the players.
Harvinder didi enlightened the gathering on various topics.  Some of which included “Where do values come from?” “Parenting styles”, “Freedom and Boundaries”  and “The power of a question”.  Every session was interactive and parents were quite amused by her discussion on “Nothing can be taught, which is one of the core principles of Sri Aurobindo.  There was also a group display on “Self Learning” by teachers. Sheetal didi spoke on “Food And Nutrition” and explained the dietary rules of the school.  On the last day, questions from parents were answered.